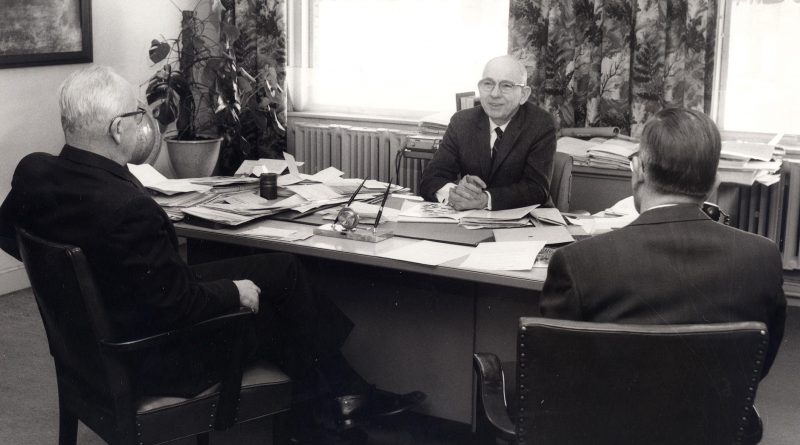 July 7, 2021 – As we celebrate our country’s 245th birthday, it’s fitting to recall that the U.S. pension system also dates to this formative time. Revolutionary War veterans were the first to benefit from pensions designed to provide replacement income, offer performance incentives, attract new recruits and arrange for orderly retirements.

Since I blogged about the history of U.S. pensions, I’ve been inventorying OPERS’ annual financial reports, actuarial valuations, member publications, photographs and other historical resources. They’re invaluable in preparing everything from educational presentations to associate retirement commemorations. Here are a few of my favorite discoveries about OPERS.

Now in its 86th year of providing secure retirement benefits for members, OPERS was the first statewide retirement system for public employees. It was also the first public retirement system to offer a comprehensive schedule of benefits that covered survivor, disability, service retirement, benefit vesting and refunds; provide monthly benefits for dependents of members who die prior to retirement; extend coverage to elected officials; and include local subdivisions on a mandatory participating basis.

OPERS has achieved a reputation among retirement systems for its creative management techniques. Its commitment to handling vast amounts of information productively and efficiently has made it a leader of automated data processing. Automation efforts started at OPERS in 1972, improving disbursement of pension benefits by replacing manual systems of locating records and posting ledger cards with an online system to speed access to account information. Six years later, IBM published a case study documenting how it had helped OPERS implement the most comprehensive data processing application the system had attempted at that time. We’ve come a long way since tabulating cards were punched and monthly benefit warrants were printed, signed and mailed.

From its earliest days, OPERS has been committed to helping members understand their retirement benefits and how the system operates. Since 1956, our Retirement Information Series has guided members through topics such as beneficiary designation and survivor benefits, how to figure and apply for a retirement allowance, refund redeposits, payment plans and information specific to law enforcement officials, sheriffs and deputy sheriffs.

“Uncle Perky, the chief handy-man for the system,” was our first foray into branding. Our current logo – a triangle composed of three distinct shapes – not only represents OPERS’ three current retirement plan options, but also forms a pyramid, representing the strength and tradition in providing retirement benefits for which OPERS is known. The figures are presented to form an ‘O’ in the center, a reminder that this retirement system was formed specifically to represent Ohio employees.

Howdy, the OPERS retiree newsletter produced from 1963 to 1981, was introduced to make the system a little less formal. It introduced me to some fine public servants in the OPERS leadership ranks.

Fred L. Schneider (pictured behind the desk in our feature photo) came to OPERS in 1938 to be its in-house actuary and statistician; he served as the system’s executive director from 1943 until he retired in 1971. An award-winning public official, his conservative management style was founded on the stewardship that he felt he owed to members and the citizens of Ohio. Under his leadership, OPERS became the nation’s first public retirement system to be established on a sound actuarial reserve basis, where reserves are accumulated as the liabilities for benefit payments are incurred, so that sufficient funds are available on the date of each member’s retirement to pay his or her future benefits.

“The tragedy in most of our lives is not the bad that happens to us, but the real tragedy is that many, many wonderful things could have happened but didn’t,” Schneider once said. “Accordingly, I looked at retirement – not as a one-way street but as a bridge to many wonderful and meaningful things for which there just wasn’t time or the freedom before.”

John Reed began with the City of Springfield as an operator and eventually became sanitation supervisor for the city. When he was elected to the Board for a two-year term in 1979, the former leader of AFSCME Local 1608 said, “I had no idea what was involved in running a retirement system of this size. It wasn’t long before I learned that from top to bottom, we have a staff that is really concerned and really dedicated to making sure Ohio’s public employees get a decent retirement. The best part about it is that when I talk to retirees or the membership, I hear nothing but compliments about how they’re treated by the PERS staff.”

Reed also lauded the performance of his fellow Board members. “I’m really amazed how nine people, representing every different type of office and employee imaginable, can lay prejudices aside when they sit down at that table. It’s no wonder we have a fine system.”

7 thoughts on “Notes from OPERS’ history”